Stem Cell ALS Treatment: Amyotrophic Lateral Sclerosis (ALS) is a rare neurological disorder which is mainly related to nerve cells. Our neurons are responsible for muscle movements, like chewing, talking or breathing, just to name a few. It is a severity disease which means it will be increasing over the course of time. ALS Stem Cell Therapy is available now at our treatment center in Bangkok, Thailand.

It is reported that every day, an average of 15 people are newly diagnosed with ALS — more than 5,600 people per year. Most people who develop ALS are between the ages of 40 and 70, although the disease can occur at a younger age. It occurs throughout the world with no racial, ethnic or socioeconomic boundaries.
The causes of ALS are not known, but a study in 1993 showed that the patient’s body produced Cu/Zn superoxide dismutase (SOD1) which was associated with some cases of ALS. The primary cause can be considered as genetics, many scientists in their study have found out that the mutant SOD1 can become toxic. Even environmental factors such as diet, infection agents, and viruses can also be the causes.
At first, symptoms of ALS tend to be overlooked but as time passes they become more severe and progressively turn to atrophy. The early symptoms can be muscle twitches in arms, legs or tongue, muscle cramps, difficulty in chewing or swallowing, stiff and tight muscles. Many people who are affected by ALS have observed that the first sign has been seen in arm or hands; they are unable to do regular chores such as writing, opening a lock with the key, or putting the buttons of their shirts, hence why quite often one cannot say precisely where or when they got the first sign or symptom.
Previous
Next 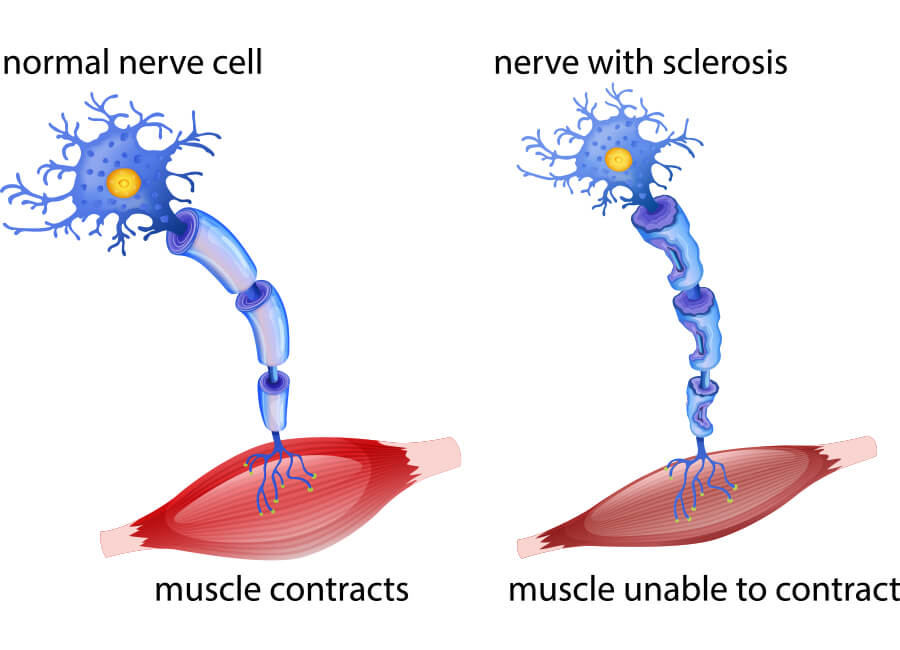 There are no single tests that can detect ALS. The physician has to review the medical history and then conduct neurological examinations periodically to check whether the symptoms are getting worse or not. The primary diagnosis is made by observing the signs and symptoms by the physician after running a series of tests. These tests can be electromyography (EMG) wherein the electrical ability of the muscle fibers is checked through special recordings. Then there is Nerves Conduction Study (NCS) and this test is done on the nerves. The doctor may also refer to Magnetic Resonance Test (MRI) including a set of laboratory tests such as urine and blood tests.

MSC´s have plasticity properties and the ability to provide growth factors which modulate the immune system. The transplantation of Mesenchymal Stem Cells (MSCs) leads to the increase in the survival of neurons as these cells are known to produce proteins that are helpful in the growth and survival of new-developing and mature neurons. Moreover, the idea of replacing the dying neurons with new stems cells is now more realistic, feasible and appealing. Patients who have been treated with stem cells have shown improvements in coordination, balance, speech, swallowing and few other areas as well.