Multiple Sclerosis (MS) causes dysfunctions of the neurons as a result of myelin destruction (a substance that surrounds the body’s nerve cells). Myelin is a fatty material that plays a vital role in the nervous system because it enables information transmission between neurons. MS causes dysfunction of the musculoskeletal, sensorial and cognitive system and sometimes the condition can have negative effects on activities of internal organs such as the kidneys and gastrointestinal tract.
The causes of Multiple Sclerosis are still unknown; however, it is considered an autoimmune disease where the body’s immune system attacks its own tissues.
The effects of this condition vary from one patient to another. Some patients may have mild signs and symptoms and may not require treatment while others will have challenges getting around and performing daily activities.
Previous
Next 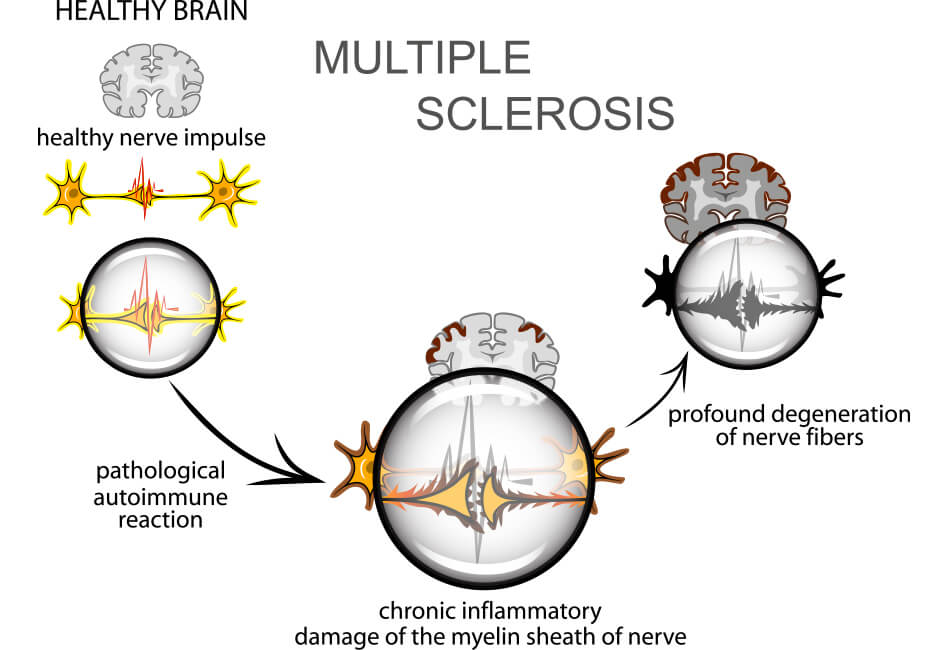 In multiple sclerosis, for some reason T cells (immune system cells) pass from the bloodstream and into the central nervous system. It is thought that dysfunctional microglia may be responsible for the initial onslaught. This rampant inflammation leads to the loss of neurons, axons and glial cells leaving the myelin sheath compromised. As the myelin sheath disappears in multiple areas, it leaves scars (sclerosis). The areas without the protective myelin sheath are called plaque or lesions. As the lesions worsen, more axons and nerve fibers are damaged or die resulting in communication problems between the brain and the rest of the body.

Standard Multiple Sclerosis treatments consist of medication which only helps manage the symptoms by suppressing, slowing down or altering the body’s immune system activity. These drugs don’t repair the damaged myelin but instead exposes one to fatal and life-threatening side effects.
Multiple sclerosis stem cell therapy works more effectively on the disease.

Stem Cell Treatment for MS is showing very positive outcomes for patients due to their ability to Reduce MS Disease Activity and Augment Repair.