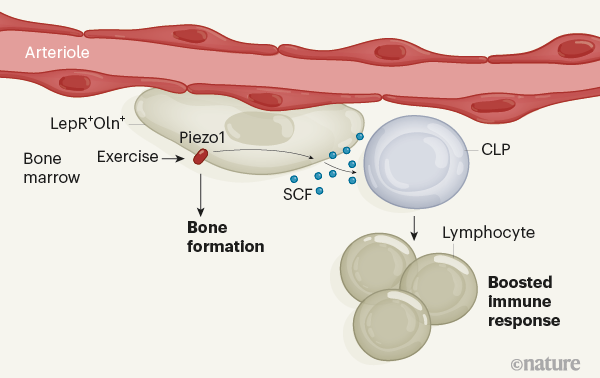 A specialized type of bone-cell progenitor has been identified in the bone marrow, and shown to support the generation of immune cells called lymphocytes in response to movement.

It is pretty crowded in the bone marrow. Many types of stem and progenitor cell, including progenitors of immune cells, coexist side-by-side1,2 and are supported by nearby cells that generate specialized protective environments for the stem cells, called niches. The interplay between the cells of the niche, also known as stromal cells, and early progenitors of immune cells in the bone marrow is poorly understood. Insight into how this interplay is coordinated would help us to better understand how progenitors of immune cells are generated. Writing in Nature, Shen et al.3 have solved part of the puzzle by identifying a role for movement in stimulating communication between one type of stromal cell and immune progenitors in mice, ultimately helping the animals to fight infection.Read the paper: A mechanosensitive peri-arteriolar niche for osteogenesis and lymphopoiesis

The various types of stem and progenitor cell in the bone marrow are highly interconnected, both physically and functionally. For instance, mesenchymal stem and progenitor cells, which give rise to bone, skeletal tissue and fat cells, are an essential part of the stromal niche for haematopoietic stem and progenitor cells (HSPCs). HSPCs, in turn, are responsible for the production of all blood-cell lineages, including immune cells4. In mice, some mesenchymal progenitors produce a signalling protein, called stem cell factor (SCF), that is crucial for supporting HSPCs5. These cells also express a cell-surface protein called the leptin receptor5 (LepR). LepR-expressing (LepR+) cells reside in several distinct locations in bone marrow, including around two types of blood vessel, arterioles and sinusoids. However, the LepR+ population is a mixture of mesenchymal progenitor cell types5. Shen et al. set out to home in on the subset of LepR+ cells involved in maintaining the HSPC niche.

The authors performed a gene-expression analysis of LepR+ cells, which revealed that one subpopulation also expresses another marker protein, osteolectin (Oln). The group generated mice in which these Oln+ cells fluoresced, and found that Oln+ stromal cells reside around arterioles but not sinusoids. They then demonstrated that the cells are short-lived osteogenic progenitors, which give rise to bone-forming cells called osteoblasts that have a crucial role in bone regeneration.Blood flow forces liver growth

Shen and colleagues then engineered mutant mice to lack the gene encoding SCF in Oln+ cells. The resulting lack of SCF in Oln+ cells did not affect haematopoietic stem cells or most other types of haematopoietic progenitor cell in the bone marrow. However, it did lead to a significant reduction in the number of one special type of haematopoietic progenitor — the common lymphoid progenitor (CLP), which gives rise to immune cells called lymphocytes. In support of the idea that the Oln+ cells help to generate and maintain CLPs, the authors demonstrated that Oln+ cells and CLPs reside close together in the bone marrow. They next infected the mutant mice with a disease-causing bacterium, Listeria monocytogenes, which is usually cleared from the body by lymphocytes. The mutant animals cleared the pathogen much less effectively than did controls. The animals simply did not produce enough lymphocytes to do the job, owing to the reduced number of CLPs.

Mechanical stimulation of bones, which occurs during exercise, is known to promote bone formation6. In a final set of experiments, Shen et al. placed mice in cages that had running wheels, and found that running led to a higher number of both Oln+ cells and CLPs in bone marrow. The group found that the Oln+ cells express the mechanosensitive ion channel protein Piezo1, and showed that CLP numbers are abnormally low in mice engineered to lack this protein. Thus, the authors have uncovered a previously unknown pathway by which exercise, sensed through the mechanosensitive protein Piezo1, triggers SCF expression in osteogenic progenitors to help maintain CLPs, thereby controlling part of the function of the immune system (Fig. 1).

The discovery that mechanosensitive osteogenic progenitors have a role in fighting bacterial infections is exciting. It was known that movement can stimulate the immune system7, but the advance in Shen and colleagues’ work provides one reason why this is the case. If relevant to humans, the work could have direct clinical applications. For example, the pathway uncovered in the current study could be harnessed to develop better therapies to strengthen immune-cell output triggered by movement. A logical next step will be to test whether voluntary running can indeed improve bacterial clearance in mice. Another key question to address will be whether increasing the numbers of Oln+ cells and CLPs in bone marrow would help to provide protection against other disease-causing bacteria, or even viruses, or whether it might also boost vaccination responses.A gut feeling for cellular fate

The authors also found that the number of Oln+ niches, and the number of CLPs, was lower in the bone marrow of 18-month-old mice than in their 2-month-old counterparts. Aged animals are also active8, so factors other than reduced movement might contribute to this ageing-related decline.

It would be interesting to investigate, for instance, whether the way in which Oln+ niches sense mechanical stimulation changes over time, or whether epigenetic changes (modifications to DNA that can alter gene expression without changing the underlying DNA sequence) in aged Oln+ cells make them less effective in generating signalling molecules such as SCF.