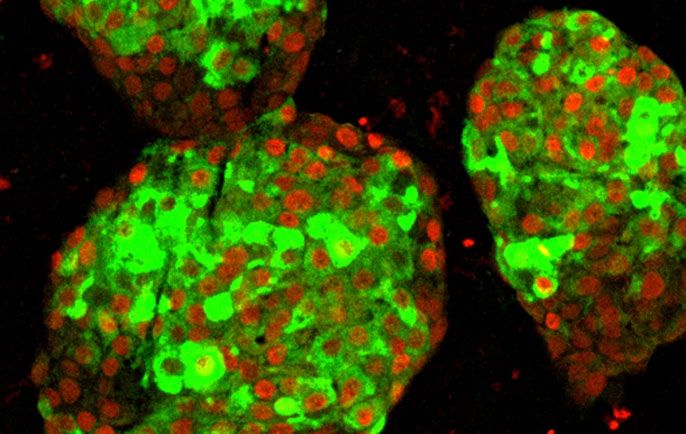 Summary:The human body can be genetically inclined to attack its own cells, destroying the beta cells in the pancreas that make insulin, which helps convert sugar into energy. Called Type 1 diabetes, this disorder can occur at any age and can be fatal if not carefully managed with insulin shots or an insulin pump to balance the body’s sugar levels.

The human body can be genetically inclined to attack its own cells, destroying the beta cells in the pancreas that make insulin, which helps convert sugar into energy. Called Type 1 diabetes, this disorder can occur at any age and can be fatal if not carefully managed with insulin shots or an insulin pump to balance the body’s sugar levels.

But there may be another, personalized option on the horizon, according to Xiaojun “Lance” Lian, associate professor of biomedical engineering and biology at Penn State. For the first time, Lian and his team converted human stem cells into beta cells capable of producing insulin using only small molecules in the laboratory, making the process more efficient and cost-effective.

Stem cells can become other cell types through signals in their environment, and some mature cells can revert to stem cells — induced pluripotency. The researchers found that their approach worked for human embryonic and induced pluripotent stem cells, both derived from federally approved stem cell lines. According to Lian, the effectiveness of their approach could reduce or eliminate the need for human embryonic stem cells in future work.They published their results today (Aug. 26) in Stem Cell Reports.

Stem cells can become any cell type through environmental conditions or laboratory interference. The trick, Lian said, is figuring out the precise conditions to sway a stem cell to become a functioning version of the desired cell type.

“If we could convert stem cells into pancreatic beta cells and transfer them back to the patient, it might be possible to cure diabetes,” Lian said. “It’s a difficult question. Scientists have been trying to find the solution for more than 20 years. Our lab realized we had to take a different approach.”

In previous attempts, according to Lian, researchers used growth factors, or groups of proteins, to manipulate stem cells into various cell types. Growth factors, however, are expensive and unstable, resulting in a costly and inefficient manufacturing process.

“In 2012, our team discovered a completely new molecular mediator that could differentiate stem cells to the mesoderm or endoderm stage, which are points of development on the way to mature cells,” Lian said, noting the process made use of small organic molecules rather than larger growth factors. “These small molecules are much cheaper and far more stable than growth factors, and we could still emulate the effect of the growth factors to differentiate stem cells to an intermediate stage.”

The small molecules comprise a chemical compound called CHIR99021 (CHIR) and activate the signaling pathway called Wnt, which directs the cell to one of the intermediate types. When Wnt is fully activated, the cell becomes a mesoderm and, eventually, a mature heart cell. But a smaller dose of CHIR only partially activates the Wnt pathway, resulting in an endoderm cell that can be coaxed into a mature pancreatic beta cell or liver cell.

“No one else discovered this because you have to precisely and carefully optimize the CHIR concentration,” said first author Yuqian Jiang, a biomedical engineering doctoral student in Lian’s lab. “We know CHIR is important for stem cell differentiation, but others might test only one off-target concentration of this chemical and think it does not work at all. We tested all possible concentrations and found the precise one for differentiating stem cells into endoderm cells.”

The researchers dosed cells with increasing concentrations of CHIR. They found the lowest dose was not enough to convert the cells, while the higher doses killed off the cells entirely. At the second and third lowest doses, up to 87% of the stem cells became endoderm cells that could be further guided to become pancreatic beta cells.

“Beta cell differentiation takes about a month, with the addition of different chemical cocktails established by previous research at different steps,” Jiang said. “But previous protocols used growth factors to advance the stem cells to endoderm cells. Our protocol eliminates that need, saving the cost while still making a good number of cells.”

The researchers also tested the developed pancreatic beta cells with glucose. The cells produced insulin based on the glucose present in their environment, demonstrating their functionality, Lian said. To keep patients’ bodies from killing off these cells — the initial problem for people with type 1 diabetes — the researchers plan to encapsulate the engineered stem-cell derived beta cells with biomaterial polymers before transplanting them. According to Lian, this would protect the cells while still allowing them to sense their environment and make appropriate levels of insulin.

“Our approach allows us to use the same low-cost chemical at different doses to generate different intermediate cell types, one of which can become pancreatic beta cells,” Lian said. “We’re now working to optimize this approach and move it to clinical trials, but we’ve done the hard work of significantly lowering the cost. Cell therapy is amazing, but not everybody can afford it. Our goal is to make it available to everyone who needs it.”

Lian also is affiliated with the Huck Institute of the Life Sciences.

“When I first heard Lance talk about what he was trying to do, I was amazed at his audacity,” said Andrew Read, director of the Huck Institutes of the Life Sciences. “His work epitomizes the kind of science that aims to completely change the game. I’m really pleased he has achieved this important milestone.”

Other contributors include Lian’s lab members Chuanxin Chen, who graduated in 2018 and is now with the Bioland Laboratory in China, and Lauren N. Randolph, a postdoctoral scholar in the Department of Biomedical Engineering and the Huck Institutes of the Life Sciences. Xin Zhang and Songtao Ye, with the Department of Chemistry in the Eberly College of Science; and Xiaoping Bao, with the Davidson School of Chemical Engineering at Purdue University, also contributed.

Materials provided by Penn State. Original written by Ashley J. WennersHerron. Note: Content may be edited for style and length.